Hallelujah, a miracle tool has been released to the world. This Windows/Mac tool is called Spirit and it enables you to jailbreak any iPhone, iPod Touch or iPad quite easily. And Gizmodo is all over it, with an in-depth guide on exactly how to do it. 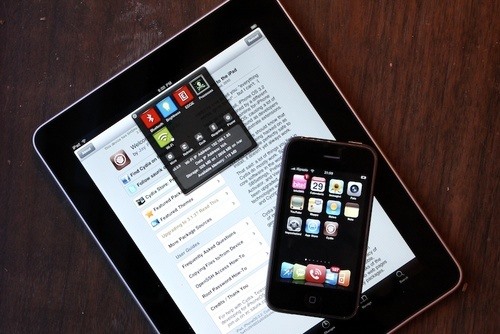 Some of you may be hacking novices (such as myself). You may ask: what exactly is jailbreaking? Well, when you buy a product from Apple, you are bound by Apple-approved apps only. So, what exactly can you do about it?

"Enter jailbreaking. In technical terms, to jailbreak is to enable a device to run code, meaning programs or system modifications, that hasn't been sanctioned by Apple. Its roots reach back to a time when there were no apps for iPhone OS, and a clever group of hackers zeroed in on some exploits gave people their first way to install apps on their devices, by way of an underground App Store called Installer. It used to be that you could hack your device simply by visiting a webpage. That was two years ago. Since then, the iPhone and iPod Touch have been given a legit App Store, Apple has closed one security hole after another, and jailbreaking has become alternately more and less difficult, depending which device and software version you have."

Luckily, Spirit puts an end to all these troubles. Here's how to do it, courtesy of Gizmodo:

-is working (i.e. not stuck in a startup loop, or displaying that "Connect to iTunes" screen)

Step 1 Plug in Your Device

"Plug your device in, so that it's recognized by iTunes."

Step 2 Don't Forget to Back Up!

"Back up your device to your iTunes library, and sync it. Having the backup handy will allow to you restore your settings in case you need to wipe your device later; syncing everything—including photos, which some users report losing during the jailbreak process—ensures that all the media on your device will remain untouched, or at least restorable."

"Open the Spirit Jailbreak tool. It will open in a small window, and should display a message like 'iPad (3.2) Connected.' If not, disconnect and reconnect your device, and open the tool again."

"During the jailbreak routine, don't interfere with the device. It's probably better to leave your computer alone as well, to avoid a crash at a critical moment. First, you should see a screen on the device that says 'Restore Complete.' The device will restart, display a spinning pinwheel icon, and open up a colorful screen like this, with a progress bar: 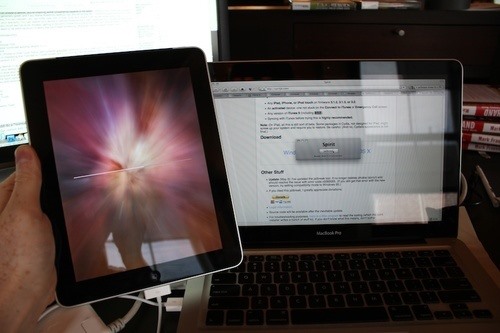 Spirit should be done doing its thing in under 30 seconds. Your device should then boot up to your homescreen, as it was before—same background, same apps, same settings. Now you're jailbroken."

"When you restart your device, you'll see a new icon on your homescreen, called Cydia. Open it up. This is your new App Store. Don't worry, the regular App Store still works. Now you've just got another one. Cydia will look a bit different on the iPad and iPhone or iPod Touch, but will contain most of the same software. 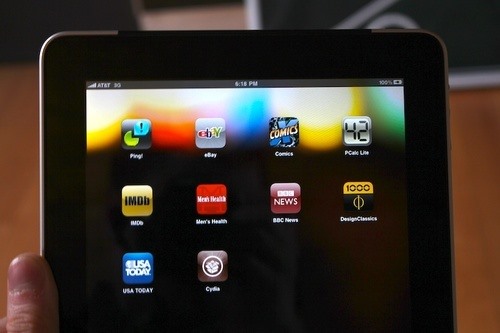 The first thing you need to do, though, is click the button that says, 'Make my life easier, thanks!'

This will back up your device activation profile (called an SHSH blob) to remote servers, which ensures that you won't lose the ability to jailbreak if you accidentally upgrade your device device software in the future."

"When you jailbreak or unlock a device, you're chaining some fundamental aspects of the system software—you know, real low-level stuff. The tools are generally good, and if you follow directions carefully, you should be fine. But if something goes wrong—and there is more than one way this can happen—you can suffer data loss, or even brick your phone. Even worse, Apple claims that jailbreaking voids your warranty. You can restore your device to remove evidence that it ever happened, but if the device goes down while jailbroken, you could well be stuck. In addition, jailbreaking does not jibe with the DMCA, and breaks relate license agreements."