If you're a diehard Apple fan, chances are the new iPad 2 caught your eye, stole your heart and emptied your wallet. Who couldn't resist the sophisticated slim-body design or its fascinating new Smart Cover? Well—it seems nobody could. And if you were late to jump on the bandwagon, you're still probably cleaning that dust out of your mouth because it took off without you—leaving the latest and greatest Apple gadget out of your reach.

Nationwide, Apple's iPad 2 is scarce. It has been since the second weekend of its release. Many iPad enthusiasts are finding it difficult to acquire one. And with the recent destruction and continuing aftershocks in Japan, factories that build the iPad 2's parts cannot resume business until safe, making it a long, undetermined wait before availability normalizes. If you have one already—great—cherish it. But if you don't, prepare for a long battle.

Chris Wallace recently wrote about his hunt on his blog. Here's the shortened version:

First, he bought an old one by mistake and tried to exchange it. No luck. He then called up every Walmart within 40 miles. Nothing. He did find one that had two in stock, over 40 miles away—he rushed over, but the clerk was wrong. Failure. The next day, he scoured every Best Buy and Target nearby, waiting for one to surface. He then tried a few Apple Stores, who told him they were getting fresh deliveries that night. The next morning, he chose his Apple location and went to wait in line. Instead—out of stock—their latest shipment was iPad 2-less. Turns out, he picked the wrong store, but it was too late. Awesome. Lastly, he explored the nearby electronics stores, an his wife eventually found one lurking in Best Buy. Success! Though it wasn't really his color.

This could be your story, though it could end without success. To greater your chances of locating an available iPad 2, check out the below guide.

Best Buy's iPad 2 inventory is nearly zero, but a few iPad 2's are trickling in, either by shipments or returns. To keep an eye out for those special cases, use their inventory tracker to see if one appears. It's mostly updated in the morning, so that's your best time to check. Sometime they update their inventory throughout the day, but it's unlikely, so checking the tracker later in the day may reveal inaccurate results.

Click on your desired iPad 2 model below and enter you zip code to check availability. 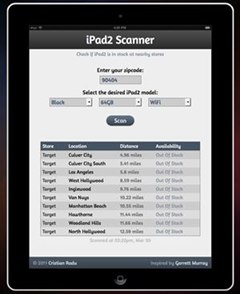 Checking your local Target stores is easier than the Besy Buy method, thanks to Christian Radu's iPad 2 Scanner.

Simply go to the site and enter your zip code, choose the right iPad for you and hit scan. It will bring up a list of the ten closest Targets, showing you the location, distance and availability.

I tested it out and found nothing available nearby, for any model. But I choose a different zip code and found one lurking, so it does work.

Alternatively, you can try search Target directly online, via the same process as Best Buy:

Though there are tracking options for individual iPad 2 models, just like Best Buy and Target, it's spotty and inaccurate. If you choose to use that option, click here. Otherwise, just go directly to the Apple iPad page at Walmart and use the Check Availability tool for your wanted model. You can choose the size (16, 32 or 64GB) once you do. 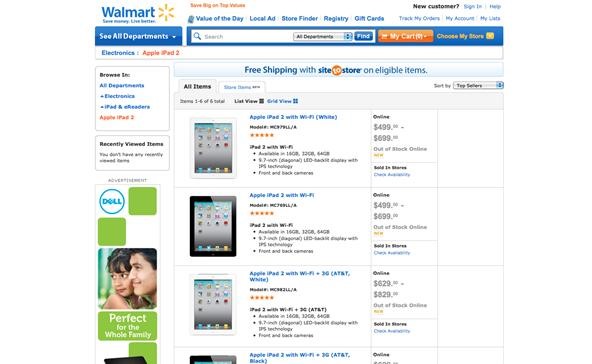 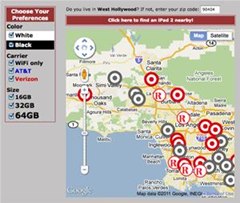 On Tuesday, RadioShack started selling iPad 2s in 500 of their stores. But the scarce inventory didn't meet the demand—stores in New York and New Jersey reported receiving no more than two dozen, selling out in less than 15 minutes on opening day. But, as with all of the other stores, you just might get lucky if you're persistent.

The iPad 2 Locator searches all of the RadioShacks nearby, as well as all of the Target stores. Just choose your poison, enter your zip and peruse the results. The best thing about this is that you actually don't have to choose your poison—you can choose all of them at once, speeding up your search, if you're not picky about which model you get.

I did a search and found a lot of stores without any models, but there were a few listed as available or limited availability.

Even though recently launched in Australia, Canada, France, Germany, Spain, Switzerland and the UK, the iPad 2 seems to be nearly sold out worldwide. And likely, a lot of greedy sellers were buying them to resell them with a ridiculous markup on marketplaces like Amazon and eBay. Every once in a while, there's a legitimate seller who just wants to get rid of their iPad 2, and that's the one you need to go for. But the task seems daunting.

Searching on Amazon.com for the AT&T white model immediately brings up disparaging results. Amazon is not selling it themselves, and the lowest price on the marketplace is currently $1,096. The highest is $1,650. The Wi-Fi only model seems to be going from $600 to $980.

With a quick glance on eBay, the highest priced single iPad 2 seems to be going for $4,000, to an unemployed American from Texas. However, it doesn't seem anyone's biting—most of the recent buys have been between $600 and $1,500. 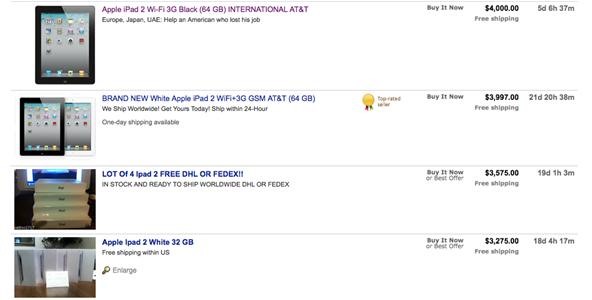 Step 6 Order from Apple and WAIT...

Do you really need an iPad 2 right now? Probably not. If you can forget about it for 3 or 4 weeks, your best bet (which could save you your sanity) is to simply order yours online directly from the Apple Store. One their site, it claims that they will ship out in 3 to 4 weeks, but who really knows. 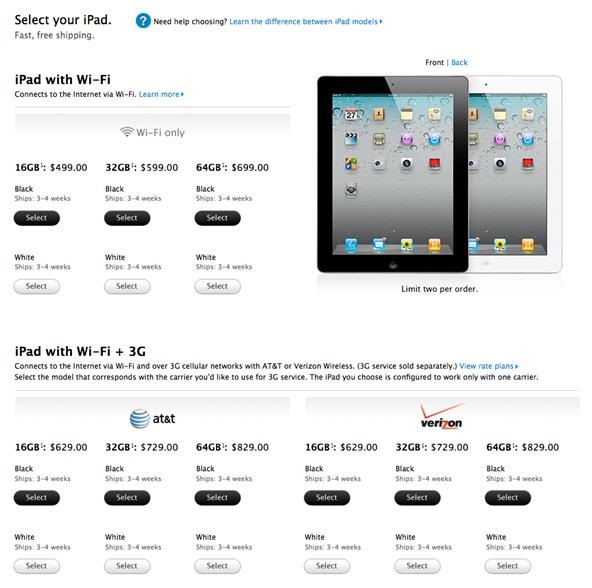 Join the Next Reality AR Community

Get the latest in AR — delivered straight to your inbox.