Forget the Apple iPad.  Forget the Samsung Galaxy Tab.  If it's a tablet computer you're looking for, then the Notion Ink Adam is what you want.  Hell, you can forget the Amazon Kindle, too, because reading eBooks in the sun-drenched outdoors is easy on the Notion Ink Adam.  At least, that's what was unveiled by Engadget today at the CES 2011.

The Notion Ink Adam tablet isn't for sale just yet, though, but that doesn't mean you can't learn how to use this powerful PixelQi Android tablet!  Check out Engadget's video demo of the Adam below at the Consumer Electronics Show 2011.

To see all of the specs and details on the Adam, check out Engadget.  But I'm more interested in the Eden UI of this mighty beast.  This is what Engadget says about the software interface:

As we've seen in the demo videos, Notion Ink has done massive amounts of work on top of Android and has created a panel centric UI.  Basically, you can add panels for certain applications by opening the application drawer and dragging an icon down.  If there isn't a panel for that app, it'll let you know.  There are three panels per screen, but you can scroll across to see more or open a cover-flow like view by tapping twice on the home button.  It's all a pretty nice layout, but it's also a bit confusing.  It took us awhile to get the hang of how to close panels and then back out of an application, and different single and double taps on the four buttons on the left bezel do different things.  We assume that after sometime with it, it would all become second nature, but a few of us Engadget editors were perplexed by some of the features. 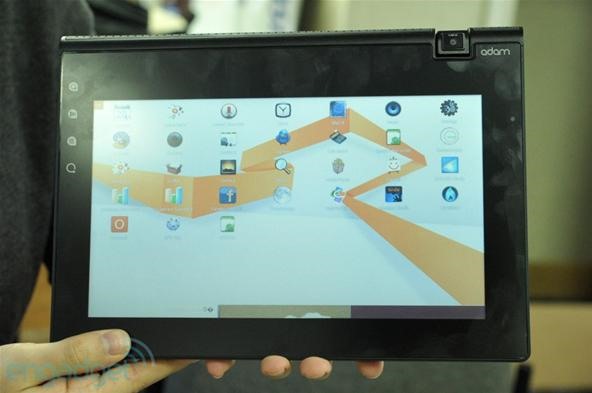 To learn more about the Eden user interface, Notion Ink themselves has compiled a sort of video walkthrough of the Eden UI on the Adam tablet.  Check out all the videos below.

I like! I wonder how much it costs, though. I bet around the same, if not more, than the iPad.