Before you go running off to the Apple store, you may want to educate yourself. DVICE is kind enough to compile the 20 biggest complaints about the iPad from a whole slew of reviewers. 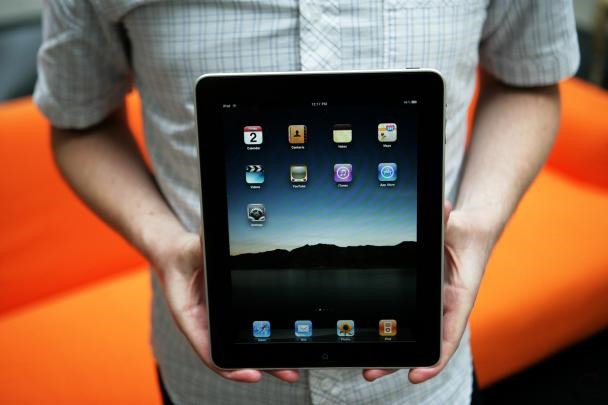 "Here's the problem: It looks terrible… What we're left with is a feature [to use old apps] that I — and I suspect most people — will use one or twice, and never revisit again." - John Hermann, Gizmodo

"Never have I seen such a fast, intuitive piece of technology for geographical navigation… For that reason alone, to me the lack of GPS in the Wi-Fi iPad is a dealbreaker." - Brian Chen, Wired

"Apple has removed screen protectors from their stores. Apparently they interfere with the new oleophobic covering. But it is clear (pun intended) to me that I will need a screen protector. This thing has my fingerprints all over it!" - Todd Bernhard, iPhone Life

4. The screen is unreadable in direct sunlight.

"Unfortunately, the touch screen is so highly reflective that it kicks up a vicious glare in a well-lit room, and practically doubles as a mirror in full sunlight." - Robert Strohmeyer, PCWorld

"Some will decry the absence of a USB port or other connectors, which might let you hook up a printer or bolster storage. Everything comes through the standard iPod-like dock connector on the bottom of the iPad." - Ed Baig, USA Today

6. The virtual keyboard still doesn't beat a physical one.

"The on-screen QWERTY keyboard is more finger-sized than iPhone… but I didn't find myself using the device for lots of text input (email, blog post composing) without the aid of the keyboard dock — pretty much exactly like the standard Mac keyboard." Xeni Jardin, Boing Boing

"On the iPad, YouTube looks like, well, YouTube. Just as HD television doesn't do good things for bad skin, the iPad's glorious screen merely serves to make low-resolution YouTube video content look worse than it does on the iPhone or other smaller screens." - Tim Gideon, PC Magazine

"My first reaction when picking up the gorgeous device was how heavy it was. Apple lists the device at over a pound, which doesn't sound like a lot. But when picking an iPad up, the weight is more than one would expect." - Matt Brewer, Mac Fanatic

9. Charging the iPad via USB on a PC has been shaky at best.

"Here's where the iPad did not charge: Front and rear USB ports on a variety of Windows computers; USB port on an Apple wired keyboard attached to an iMac." Jeff Fox, Consumer Reports

10. The headphone jack up top is awkward.

"…it would've been better on the bottom so that pesky cable would stay out of the way. But then maybe Apple was thinking you'd be using it in horizontal mode when you need the headphones." - Charlie White, DVICE

11. The Home button gets in the way while holding the iPad horizontally.

"Held horizontally, it's on the left or right side, which also happens to be where your fingers are while playing many games. Hitting it closes the game you are playing, causing you to shout obscenities while neighbor children are playing outside your open window." - Mike Fahey, Kotaku

12. Some Apps have been found to be unstable.

"After a few hours of playing with the device, Westerhold encountered some minor glitches. His Wikipedia app crashed, and the Netflix app was a little slow." - Henrick Karoliszyn and Larry McShane, NY Daily News

13. The battery is not replaceable.

"As on all Apple portable devices, the battery is sealed in and nonreplaceable." - Walt Mossberg, AllThingsD

14. The iBookstore only works with the iPad.

"There's an e-book reader app, but it's not going to rescue the newspaper and book industries (sorry, media pundits)… And you can't read books from the Apple bookstore on any other machine — not even a Mac or iPhone." - David Pogue, The New York Times

"The new App Store is a step backwards from the iPhone version, unless I'm missing something. There's no good way to browse all the apps in the store anymore… There's a heavy focus on popularity and featured apps, without an easy way to drill down on the store." - Will Smith, Tested

"…we love the split screen displays and real estate for composing, but still feel like we're floating out in the ether when managing our email. It works, it's fast, it's consistent... it's just not what it could be." - Joshua Topolsky, Engadget

"…the iPad offers no conventional system of files and folders for storing work… The iPad was able to quickly and gracefully open my emailed PDFs but offered no way to save the files to the iPad for future access. Consequently, to read one PDF over several days, I had to repeatedly search for an archived email, re-download the PDF and then open it as if for the first time." Omar Wasow, The Root

18. The HD apps are expensive.

"Twice the pixels for twice the price? Come on, guys. This isn't science of the rockets. Why do I need to pay $4 for an HD version of Fieldrunners? Gold rush much?" - John Biggs, CrunchGear

"…only the word processor exports to Microsoft's formats, and not always accurately. In one case, the exported Word file had misaligned text. When I then tried exporting the document as a PDF file, it was unreadable." - Walt Mossberg, AllThingsD

20. The iPad is for consuming, not creating.

"…the iPad is not a laptop. It's not nearly as good for creating stuff. On the other hand, it's infinitely more convenient for consuming it -- books, music, video, photos, Web, e-mail and so on." - David Pogue, The New York Times

Join the Next Reality AR Community

Get the latest in AR — delivered straight to your inbox.

Definitely pointless to buy iBooks. Just download the Kindle App, then you can read your books on an iPad, iPhone, Mac, PC, or Kindle. And they all sync wirelessly. Oh, and they're cheaper. iBooks is pretty, but very closed / limited.

I disagree with youtube, I think the ipad youtube experience is fantastic. My 3 year old son can browse rollercoaster videos with an ease and beauty not possible on a laptop or desktop computer.

I agree for the most part and including the wifi connection problems I returned mine yesterday for a full refund.

Might want to delete (or change) #14 iBook will be available to the iPhone. And #20 is not really a complaint. It's not designed to create, it's designed to do. So what?

being a linux person i am very impressed with the ipad. i just wonder if i can make it a dual boot system?